Still available for purchase at the ABC-Clio site.

Examines the ways in which Romanticism took part in the revolution of the view of fantasy literature, arguing that nineteenth-century children’s fantasy cultivated a new image of children and the role of imagination.

Many Victorian and Edwardian fantasy stories began as extemporaneous oral tales told for the delight of children and, like Alice in Wonderland and The Wind in the Willows, were written down by chance. These fanciful stories, told with child-like spontaneity, are analyzed here to argue their role in the revolution not only of children’s literature, but of the general conception of childhood. In contrast to the traditional moral tales of the 18th century that were written with the express purpose of instructing children how to become adults, this literature that Sandner identifies as the fantastic sublime reveled in the imagination and the enjoyment of reading. By looking at the structure of the Romantic sublime and inventing and exploring the structure of the fantastic sublime, this work offers a completely new way to examine 19th-century children’s fantasy literature, and perhaps, fantastic literature in general.

The study begins with a look at works by William Wordsworth and Samuel Taylor Coleridge, focusing on the 18th-century view of childhood and fantasy. This book expands on the notion that English Romanticism played a significant role in preparing adults to accept fantasy literature for children. Connections are made to the works of Kenneth Grahame, George MacDonald, and Christina Rossetti. 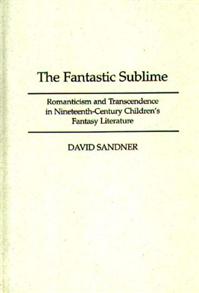 David Sandner is a writer and academic interested in fantastic literature. He is a member of SFWA and the HWA, and a Professor of English at Cal State Fullerton. Learn more about his publications at davidsandner.com View more posts